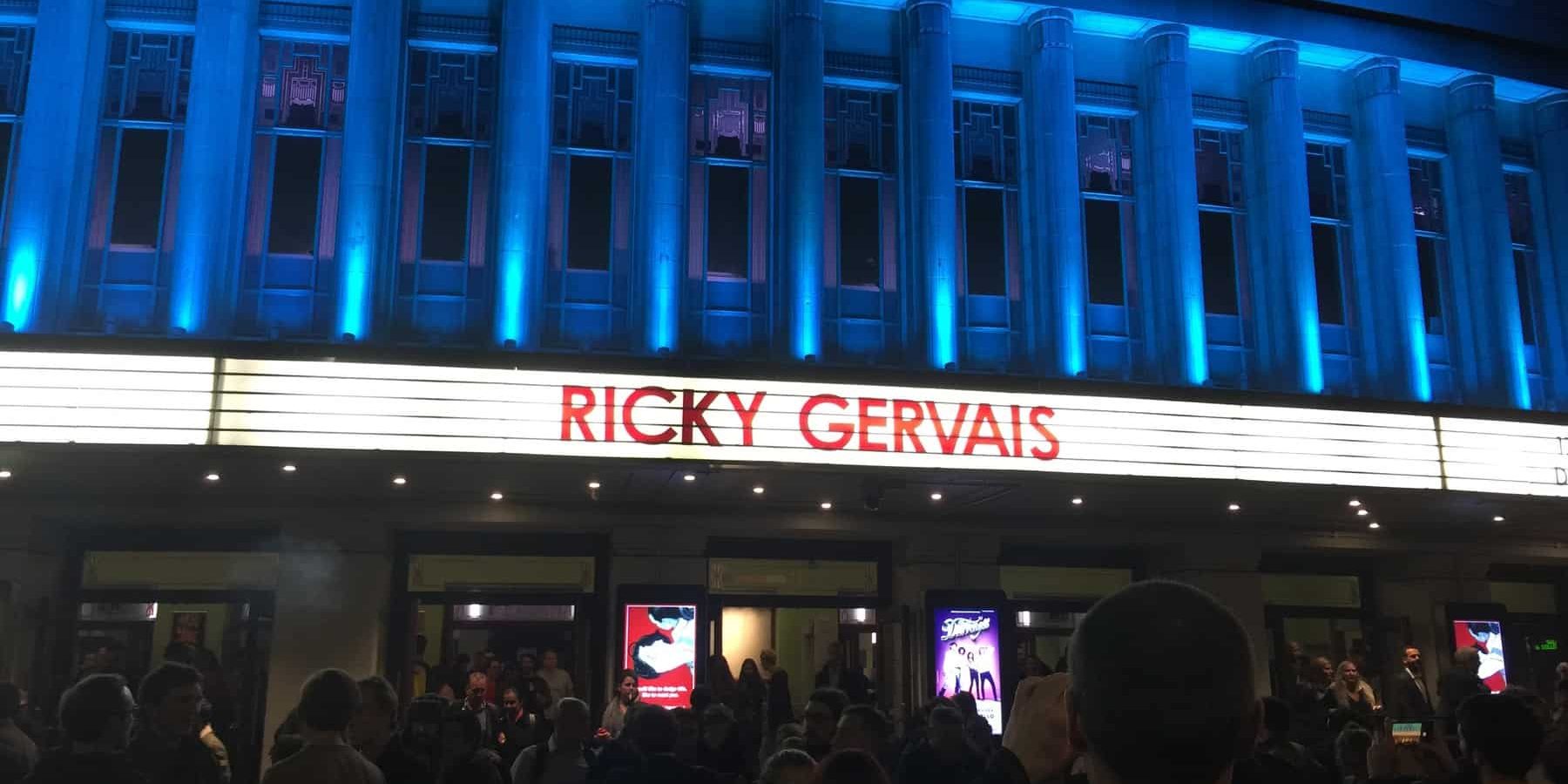 Wednesday night rushing back from Madrid I ended up at Hammersmith Apollo with my son to see Ricky Gervais. I know instantly that name causes a Marmite like feeling amongst people but I absolutely love Ricky Gervais and it was the second time I had seen him having been to his show Fame many years ago. Not in the way that I want to cuddle him, I have been married for 20 years for hecks sake but in the way people talk about movies and TV shows “I love that movie”.
Whilst not wanting to make this whole blog post a Gervais lovefest the man is an absolute genius of comedy and has played a huge part in very positive elements of my life, particularly this last year, so it was poignant for me to see him. Honestly had the Spurs Champion’s League game been on Wednesday night instead of Tuesday night, Gervais would have probably won out.

Within 10 minutes as he was discussing Caitlyn Jenner (or dare we say Bruce) I was gasping for air.
Very few comedians in my life have made me full out belly laugh or been naturally funny. John Cleese “Ok I’ll do the funny walk” is the first time I can remember being curled up in a ball laughing. I saw Billy Connolly in the same venue as Wednesday night’s show and he had me asphyxiating as he talked about lions hunting on the prairie.

Cleese, Connolly, Morecambe and Gervais are all people who I just have to see them and I start chuckling. Gervais entered stage on Wednesday I was instantly laughing. It is a great feeling. As I head towards 50 I find comedy all round is naff these days. James Corden, do me a favour. I thought the guy was an ass and if there is any truth in the excerpt on the internet this week about him on the flight with his wife and kid then my thoughts are cemented.
Sitcoms for the most part are just not funny anymore and we see the same old comedians on the panel shows that get tuned out week in week out and soon become very boring with the odd exception. Lee Mack I like as a comedian and has a great fast wit, and Sean Lock in my opinion is very funny.
I think the issue with Gervais is one that he touched on himself on Wednesday, people just don’t get him and don’t listen, read or look at the points he is making. He is a supremely clever comedian. He also seems a nice guy, cares about animal welfare an issue strong to me and understands life is about fun. I find the fact people find him offensive all the funnier.

Back to the point of the post as it does not have to be Gervais it can be someone you find funny but the point is society takes itself far too seriously and we need to make time to laugh.

I grew up with Gervais and instantly found the Office funny. The cringe type humour was right up my street watching a man play a character so desperate to be liked and loved. Training Day and the one with his character in the dance off still make me crease up now and I have seen them hundreds of time. I have over the years used them as therapy.

We all have dark moments in our life. My mum died shortly after retiring. Worked all her life, never left the UK, never smoked, never drank and was diagnosed with cancer and died within 3 days. We all lose people and it was horrendous. For me an episode of The Office at that time took my mind off it and saw me laughing without any guilt. Life has to move on and the character David Brent helped me at that time.

This summer as you most of you know my boy was at Cambridge and had a full nervous breakdown over his exams. As a parent getting through those things is trying and put me on the brink of depression. Nothing you can say or do is right and nothing you try and do for him seems to work. You get that helpless feeling. Part of us getting through it as a father and son was watching re-runs of the Office, Extras or Gervais stand up DVD’s such as Animals. We could sit and laugh together and for that half hour or hour the world was a better place for him so a better place for me. The laughter was one common ground we could find at something we both enjoyed – I guess he was bit indoctrinated growing up but he also loved the show on Wednesday.

When my dog died last November, it hit me hard. Charlie had been my companion day in and day out for 10 years and when you work from home on your own for the most part it was huge loss. Watching a full re-run of Extras and laughing helped me through it. If I am feeling shit, perhaps had a bad day trading, Gervais is often the therapy, many turn to drink, smoking, drugs for me laughter is a great medicine so try it, doesn’t have to be Gervais but try him he’s good I promise you.

Life is serious of course it is. We need to earn money, pay bills, raise kids, mortgages etc. BUT we all need to make time to laugh and that is the point of todays post. Gervais touched on the point of social media on Wednesday and whilst I have started using Twitter again more for my own therapy (in the same way these blog posts are therapy for me) than anything else, as sitting home alone all day staring at screens and talking to no one does drive you round the twist at times, I find the whole social media set up a cancer on society. I have posted this video before of Sean Lock talking about Twitter and it is worth watching particularly relevant now we have the leader of the free world piping up in 140 characters numerous times a day.

It just is not to be taken seriously but people live their lives through Twitter and Facebook as if it is a real thing, I have a gazillion friends and they all must love me. Feck Off!

Everyone is abrasive and right. Opinions are not allowed; sensible discussion seems impossible and everyone takes themselves far too seriously. We are here for a short space of time lighten up and enjoy it.

I have met hundreds of people at the seminars I have run since 2013 and some of the attendees take life far too seriously and I am sure would get more things out of all aspects of life if they lighten up and I don’t mean that offensively. Life is for enjoying and fun surely.

When my mum died having had a shit life ( my father was/is an alcoholic idiot that I haven’t spoken to for 30 years), I made a decision there and then the day she died I was going to change my life.

I left my dead-end job, chased my dream of trading and became a millionaire off my own back, I had one goal in all that though and it was not the money, it was nothing other than having fun in life and making the most of it. That is the starting point for you guys, the rest then falls into shape and hard work becomes enjoyable, I got up at 4am this morning to process excel sheets and I embraced it where most would roll over back to sleep or not entertain the idea in the first place. I look at the fun that work will lead to, holiday in Vegas, trip to Madrid to see Spurs there is always something fun to reward me on the end.
Hopefully not too heavy a blog post and you get the underlying tone to it, if not, tough, really I write them for me not you.

I will leave you with another video and Gervais mentioned on Wednesday that Humanity as the show is called is in decline (words to that effect I was laughing so may have that not quite right) and I believe it is. Just watch the video below and pay real attention to the answers these people give. You will soon realise your life can only be better than these guys and that is the starting point. I don’t ever mention politics as rule but this is incredible and where we are headed currently.

Hopefully you have a laugh. Have a great weekend and if things don’t go to plan stick on an episode of Extras – the Kate Winslet one is fantastic, they all are. If your a West Ham fan you definitely need to watch one.