Now that our maiden test season was over, our party had to regroup. Sitting around a table in Essex, it was decided our party needed one more member if we were truly to succeed.

(I have no idea how this blog became lord of the rings all of a sudden, but stay with me)

Our ranks already boasted Jeff the seasoned adventurer, Palmer the priest and I, the geeky one, but our party was not yet complete. We were missing a key ingredient… We were missing ourselves a northerner!

Palmer had fled the East End to Northenshire sometime ago, but he was never going to be the northerner we truly needed, for his blood ran claret and blue… a hammer through and through.

We needed a proper northern folk, and Palmer knew just the guy.

At this point in writing the story I received a telegram from Palmer who informed me that our new recruit was not made of northern stuff at all, he was in fact an Irishman. Why to screw up my story Palmer, now we got to Rewind.

Sat at a table in Essex, we needed a different kind of warrior, we needed our selves a Paddy, and Palmer knew just the man.

To this day, none of the party has ever heard the voice of our new Gallic comrade Dublin Mark, but his genius in matters of football was an inspiration to the party. No one, not even a seasoned northerner knows more about football then our man Dublin Mark and his addition completed the dream team.

Though the party was dotted around the British Isles and resided hundreds of miles away from each other, we utilised the power of Dropbox and Telegram (Whatsapp for cooler people) to pool our resources, knowledge and experience to form a plan of attack for the new season.

Each armed with a FTS and FDD membership, we began to build.

As Palmer and Dublin Mark were already seasoned veterans to FTS, they had already collected a fine catalogue of 15-30 point systems. So what could the Geek and Adventurer bring to the table?

Like many of you, our starting database was split into two, Original and New Leagues, which were full of selection macros with pretty buttons as taught by Ian the prophet in his educational videos.

The first thing we did was redesign the data and selection process by using a handy tool in Excel called Power Query. By conjuring the power of the Power Query, we were able to merge the two databases together with a click of a button and we never had to worry about separate databases again as this would become very important later on…

The art of updating the database also became a one click wonder – having downloaded the new files from the members area, we needed only to click “update” in our power query and our database was replenished with new data, keeping all our original macros intact.

Big whoop, who cares I hear you say… it doesn’t take long to copy and paste data the traditional way and that is true, but when your foundations are solid, you can build wondrous things on top.

At this stage, the teams catalogue of FTS systems was well over 40 different bet and forget systems. How were we to decide which ones to run?

IT WAS TIME TO GET GEEKY

If we were to audit these systems and really get underneath the numbers we needed a new way of interrogating data, and macros were no longer up to the task. It was time for the macros to evolve into something new, something more useful… We needed to transform those macros into formulas.

After many evenings of transcribing the old tongue to the modern, the new database was complete and magical things suddenly became possible.

There is a blog series on bots building, spreadsheets, reporting and other geeky things in the works for FTS which will be released over the coming months for those that are interested in developing their tools.

The database was now 107 columns wide but the pretty buttons had disappeared. The age of macros had ended, and the dawn of Power Query had begun.

Now we could do things like this with the data… and it was all self updating. 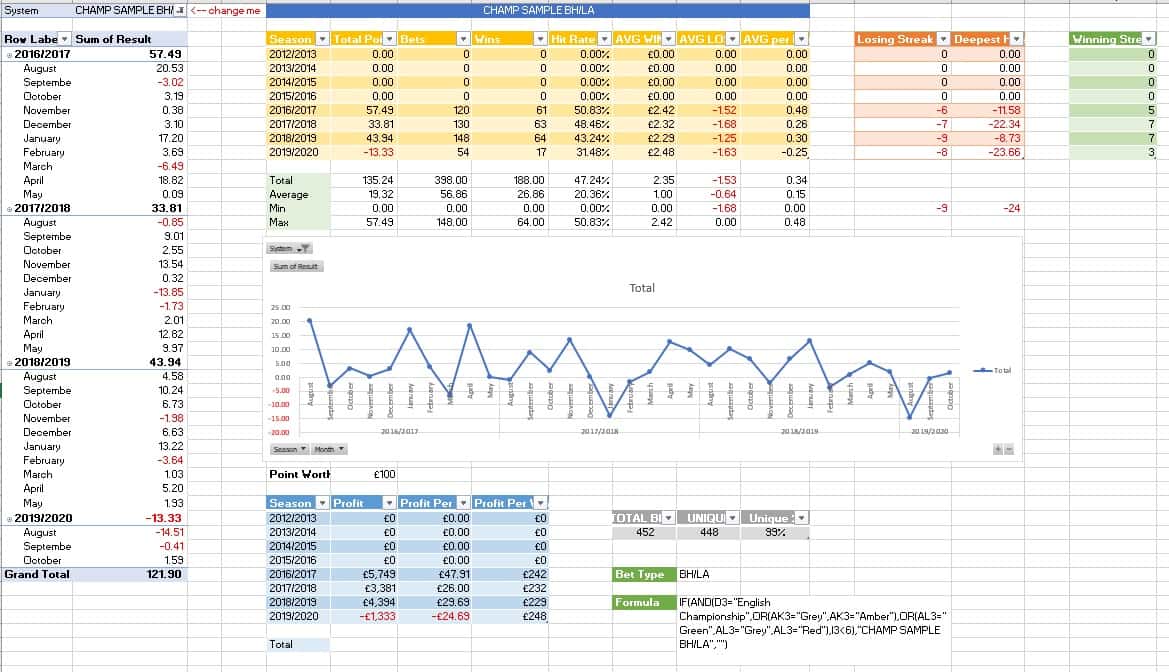 Recognise the system used in the screenshot? It’s the sample system added to this years FTS Ultimate database. Yes it had a horrible start, in fact, we have already seen the worst losing run it has ever seen over the past 3 seasons but just take a look at the breakdown, you can see it is just a blip and system audits like this really helps to visualise that fact.

This report was possible thanks to transcribing macros into formulas, and using a bit of Power Query to stick it all together and keep it updated every time there is a new download from Ian.

Now that we could see the numbers behind the numbers, it was time to chose our weapons for the new season.